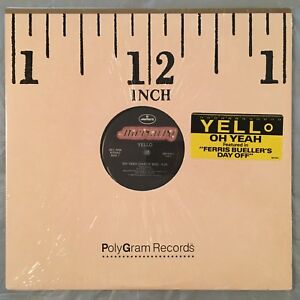 Continuing the 15th – featuring my top ten boogie tracks, and running between 21 and 30 May – here’s Oh Yeah released in 1985 by the Swiss band Yello and featured on their album Stella. It gained popularity after being featured in the films Ferris Bueller’s Day Off and The Secret of My Success, among other films.

Its 1987 re-released version features the extra lyrics: “such a good time / a really good time”.

Due in no small part to the wide-spread coverage of the Steve Barron directed video accompaniment, Norwegian synth-pop reached the No.2 slot in the UK in November 1985 in the form of what would soon become the pin-up glossy forms of Morten Harket, Pal Waaktaar and Mange Furoholmen. The video captivated us as we’d never seen anything quite like it before.

The unlikely formation of Switzerland’s ‘Yello’ came together late in 1979 when Boris Blank and Carlos Peron asked wealthy industrialist and gambler Dieter Meier to join then on vox. Indeed, it was a throw-away comment from Meier that resulted in the name – something that sounded like ‘a yelled hello’. It took them a while but Yello leapt to media acclaim with their 1983 release of “I love you”

The Yello sound is categorised by unusual music samples, a heavy reliance on rhythm and Meier’s dark, crooning vocals. Epitomised by the 1985 single ‘Oh Yeah’, I personally have vivid memories of my two eldest children going round and round the kitchen table on their tricycles to this song over and over again in the late 1980s