Bring It Back Alive is a live album by American southern rock band Outlaws, released in 1977 in the UK and 1978 stateside. It was released as a double album, and later re-released as a single CD. 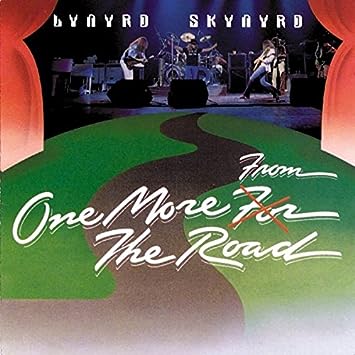 One More from the Road (Styled as “One More For From The Road”) was the band’s first live album. A double and a double gatefold, it’s the only live album from the “classic” era of the band (1970–1977) prior to the plane crash that killed lead singer/songwriter Ronnie Van Zant, as well as band members Steve Gaines and Cassie Gaines. The album was released in September 1976. It was certified gold on October 26, 1976, platinum on December 30, 1976 and 3x platinum on July 21, 1987 by the RIAA.

The original 14 tracks include a cover of Jimmie Rodgers’ “T for Texas” and a 13:30 version of “Free Bird”.

The first CD release (1986) was a single disc missing two tracks, “T For Texas” and “Travelin’ Man”, due to time constraints.

The second CD release (1996) was a two disc set with all 14 songs plus three bonus tracks: “Sweet Home Alabama”, “Gimme Back My Bullets” and “Simple Man”. The two disc set put the tracks in order of the appearance of the original concert.

The Deluxe Edition, released in 2001, is thoroughly remastered and contains additional performances from the Fabulous Fox Theatre in Atlanta, Georgia. The bonus tracks are also available separately on a “Rarities Edition”.

The live version of “Sweet Home Alabama” from this album was used as a track on the music rhythm video game “Guitar Hero World Tour.”

Here’s the 12:55 version of Freebird from a 1975 edition of ‘The Old Grey Whistle Test’ introduced by Whispering Bob Harris. There were tears this morning as I re-lived that long moment, I can tell you!