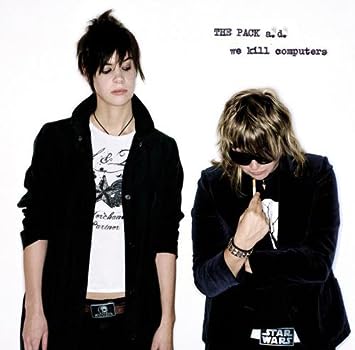 We Kill Computers is the third studio album from garage rock band The Pack A.D.. The 13 tracks were released in 2010 on Mint Records. This album marks the band’s first foray into both writing science fiction-inspired lyrics and veering away from their blues rock roots. It also contains only one song that features slide guitar, unlike much of their earlier albums.

The band (Maya Miller & Becky Black) has been quoted multiple times as claiming that their first two albums “don’t really count” and that they grew into a “completely different band” when they wrote and recorded We Kill Computers. Heartless Bastards originally formed as a four-piece band with members Erika Wennerstrom (vocals, piano, and guitar), Dave Colvin (drums), Adam McAllister (bass), and Michael Weinel (lead guitar). They played their first live show at The Comet, a bar in the Cincinnati community of Northside, in August 2003. After parting ways her original bandmates, Wennerstrom reformed the group as a three-piece with Kevin Vaughn on drums and Mike Lamping on bass. The band was signed to Fat Possum Records in 2004 after Patrick Carney from The Black Keys passed along a demo he received from Erika. The 5-song demo was recorded in December 2002 at Ultrasuede Studios by Shannon McGee and featured Colvin on drums, along with contributions from Reuben Glaser on lead guitar and Jesse Ebaugh on bass.

Rolling Stone reviewed their debut album Stairs and Elevators and said, “the Heartless Bastards are a small-town band who are ready to show the big city no mercy”. The Village Voice wrote: “deadeye accurate in pitch and message… what we’ve got is a hard, gnarled voice singing simple-seeming melodies that feel archetypal rather than ordinary, which is no easier to explain than it is to do”. Stylus gave the group high praise, stating, “(Erika Wennerstrom) and her two band mates have created an album with more rocking songs and fat hooks than most bands can dream of. It’s not just that they rock, it’s that you believe what you hear, that they love the sound they make, that Wennerstrom lays her soul bare in her lyrics without sounding like Sarah McLachlan, that the women of rock who labored to make it OK for a girl to dream of playing guitar deserve far better than Avril Lavigne or Kelly Osbourne as their descendants

Released as the lead single from their fourth studio album ‘Elephant’ in March 2003, “Seven Nation Army” is known for its underlying riff, which plays throughout most of the song. Although it sounds like a bass guitar (an instrument the group had never previously used), the sound is actually created by running Jack White’s semi-acoustic, 1950s-style Kay Hollowbody guitar through a DigiTech Whammy pedal set down an octave.