Larry Norman – Only visiting this planet (1972) 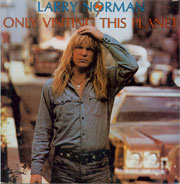 ‘Only Visiting this Planet’, the second album released by Larry Norman on 1972, was selected as the second album in CCM Magazine’s The 100 Greatest Albums in Christian Music. In April 2014 it was announced as one of 25 sound recordings inducted for 2013 into the Library of Congress National Recording Registry, that preserves as “cultural, artistic and/or historical treasures, representing the richness and diversity of the American soundscape” and making it the first Christian rock album chosen for the registry.

Only Visiting this Planet was the first album in a projected trilogy, recorded in AIR Studios in London. Often ranked as Norman’s best album, it “mixed his Christian message with strong political themes”, and “was meant to reach the flower children disillusioned by the government and the church” with its “abrasive, urban reality of the gospel”.

In a 1980 interview, Norman explained its purpose:

Only Visiting This Planet is the first part of the trilogy, and represents the present. On the front cover, I find myself standing in the middle of New York City, with buildings and traffic pressed around me and my hand on my head kind of saying, What is going on in this life? Is this really earth?, and the back cover is me visiting the site of a previous civilisation with its own monoliths, not skyscrapers, but amazing, architecturally sound structures just the same. The Druids apparently constructed Stonehenge to help them observe or worship the sun, and their civilisation is now as dead as will someday be New York. And I’m just standing there, looking around, wondering what happened to kill off this culture and reduce its entire recorded history to a few standing structures.

Who’d have thought back in the day when we watched the as yet un-named ‘Delirious?’ play from the back of a flatbed on Littlehampton seafront for the annual ‘Cutting Edge’ summer thing, that twenty-five years later, the band would be on the verge of releasing their entire back catalogue on vinyl for the world they took by storm?

Long opener yes. But that’s about the nub of it. Martin Smith, worship leader of a small West Sussex Pioneer fellowship took Delirious to world-wide fame; one of the most successful Christian bands of all time with songs widely sung in Sunday morning church services all over the globe.

Delirious? formally disbanded in 2009 following a sell-out live performance at London’s Hammersmith Apollo. But their music lives on and the release this year of the back-catalogue on vinyl will make sure of that. ‘Glo’ was their third studio album.