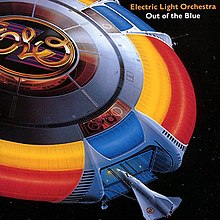 Out of the Blue was the seventh studio album from the Electric Light Orchestra (ELO), released in October 1977. Written and produced by ELO frontman Jeff Lynne, the double album is among the most commercially successful records in the group’s history, selling about 10 million copies worldwide.

In came out just as I started art college at the West Sussex College of Art and Design. So ‘Mr Blue Sky’ was very rarely off of the various Dansette and other record=players around the college and its environs that year and well into the next. It kind of became our theme song. 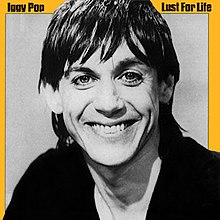 Lust for Life was the second studio album from Iggy Pop, his second solo release and his second collaboration with David Bowie, following ‘The Idiot’ earlier that year. As well as achieving critical success, it was Pop’s most commercially popular album to date, and remains his only Gold-certified release in the UK. 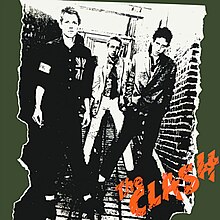 The Clash is the debut studio album by English punk rock band the Clash. It was released on 8 April 1977, through CBS Records.

Most of the album was conceived on the 18th floor of a council high rise on London’s Harrow Road, in a flat that was rented by Mick Jones’s grandmother, who frequently went to see their live gigs. The album was recorded over three-weekend sessions at CBS Studio 3 in February 1977. It cost just £4000 to produce. 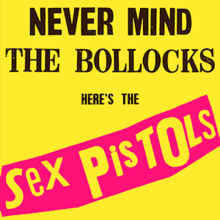 At the time of its release, the band was already extremely controversial, having sworn on live TV, been fired from two record labels, and been banned from playing live in most parts of England. The album’s title added to that controversy, with some people finding the word “bollocks” offensive. Many record stores refused to carry the album and some record charts refused to list the album, showing just a blank space instead.

Which all of course simply added to its popularity and took the album to the No.1 slot on the UK album charts within three days of its release.

In the years leading up to the album, Television had become a prominent act on the New York music scene and generated interest from a number of record labels. The group rehearsed extensively in preparation for Marquee Moon and, after signing to Elektra Records, recorded the album at A & R Recording in September 1976.

The album was released to widespread critical acclaim and unexpected commercial success in the UK, but sold poorly in the United States. Television’s innovative post-punk instrumentation strongly influenced the new wave and indie rock movements of the 1980s.

Rumours was the eleventh studio album from Fleetwood Mac. Largely recorded in California during 1976, it was produced by the band with Ken Caillat and Richard Dashut and was released on 4 February 1977 by Warner Bros. Records. It reached the top of both the United States Billboard chart and the UK Albums Chart with the songs “Go Your Own Way”, “Dreams”, “Don’t Stop”, and “You Make Loving Fun” all charting as singles.

Rumours is Fleetwood Mac’s most successful release; along with winning the Grammy Award for Album of the Year in 1978, the album has sold over 40 million copies worldwide. It’s also received diamond certifications in several countries, including the US, Canada, and Australia.

The album garnered widespread critical acclaim. Praise centred on its production quality and harmonies, which frequently relied on the interplay among the three vocalists.  It has since featured in several publications’ lists of the best albums of the 1970s and many others. 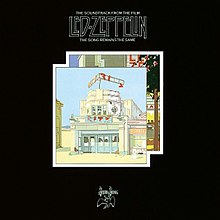 The recording of The song remains the same and the film of the same name took place during three nights of concerts at New York’s Madison Square Garden, during the band’s 1973 North American tour. All songs were recorded by Eddie Kramer using the Wally Heider Mobile Studio truck, and later mixed at Electric Lady Studios in New York and Trident Studios in London.

The album was released on 22 October 1976, by Swan Song Records. The sleeve design depicted a dilapidated movie house located on Old Street film studios in London, which was used by the group for rehearsals prior to their 1973 tour.

Until both the album and the film were remastered and re-released in 2007, there were significant differences between the two in terms of the songs included on each.

In addition some of the recordings featured on the album were of different performances from those in the film. Other tracks which were recorded at Madison Square Garden, but omitted from both the film and the soundtrack album, included “Over The Hills and Far Away”, “The Ocean” and “Misty Mountain Hop”